Jan Lever, Founder and CEO of Jigsaw PSHE, has been honoured with an MBE for her services to education in the Queens’ Birthday Honours.

Jan was recognised for her contribution to child mental health and Personal, Social, and Health Education (PSHE), and specifically for her work on the curriculum programme Jigsaw – the Mindful Approach to PSHE. She is to be made an MBE – Member of the Order of the British Empire – an award made in recognition of an outstanding achievement or service to the community.

It feels a bit unreal – it’s the kind of thing that happens to other people! I have always worked away quietly and got on with things, so it came as a huge surprise – but a wonderful one. It is such an honour.

One of the best things about it is it has made me think back over my 40-year career to all those people who supported me professionally and personally, believed in me and trusted me.

As much as it is an honour for me, it is also a tribute to all the teachers and headteachers and everyone working so hard every day in education, especially now.

I’m so proud of what has been achieved by schools using the Jigsaw programme. It is a whole-school approach that can transform culture and help create a positive place where children are better able to learn because they are better able to regulate their emotions.

Jan has dedicated her life to education. She spent 16 years teaching in classrooms across Poole and Dorset, before moving into an education advisory role at the local authority, while working as a lead national assessor for the National PSHE teacher training programme. Alongside her education work, Jan also qualified as a counsellor and psychotherapist in 2007, setting up a private practice.

After moving into self-employed education and training consultancy in 2010 she began to develop a PSHE curriculum programme for primary aged children, interweaving mindfulness practices and placing the focus on emotional literacy and mental health.

“Children’s mental health and PSHE and is such an important aspect of education but it has been the Cinderella subject for many years. The fact that relationship and health education is now statutory as of September 2020 reinforces that this isn’t an ‘extra’ – it’s core to a children’s learning experience.“

Her programme for three to sixteen-year-olds incorporates a Personal, Social and Emotional curriculum and the new DfE statutory RSHE requirements, with mindfulness practices underpinning every lesson.

After launching Jigsaw in 2013, it has continued to grow and influence teachers, children and young people across the globe.

Wondering if Jigsaw PSHE is the right curriculum...

Have any questions? We'd love to hear from you. 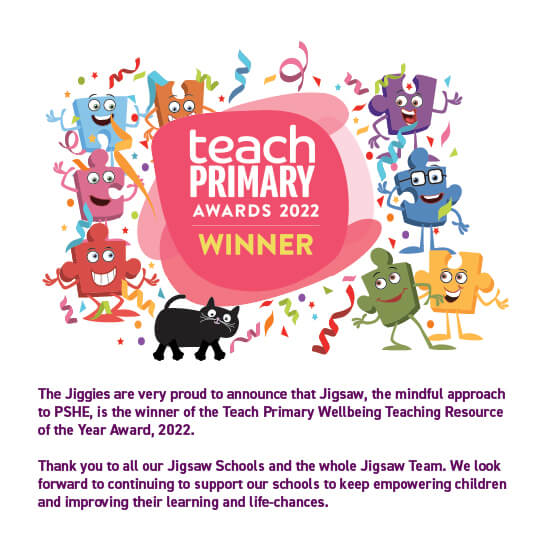 Signup with your email address to receive news and updates.

Jigsaw PSHE LTD is a company registered in England no. 08568182 and limited by share